It is with deep sadness and regret that we announce the departure of our wonderful Sheffield Union Organiser Rohan Kon who has achieved so much in the 18 months she has been with us. 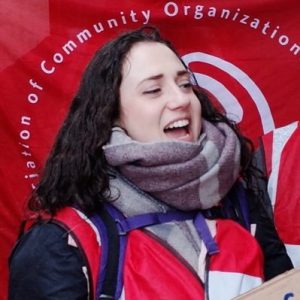 Rohan has been suffering from a health condition and has also had to endure the pain and upset of people close to her succumbing to COVID, a suicide and a dear friend who was beaten up and raped and may suffer brain damage as a result. She has told us she cannot continue and needs a complete break. We understand and support her and fully respect her decision.

Rohan has pioneered a model of union organising in Sheffield developed by BFAWU -our partner Trade Union – and the UIF’s Fast Food Rights Campaign, drawing on the inspiration of the SEIU’s radical organising model in USA. She has honed it and adapted it to circumstances here in the UK, reaching out to young fast-food workers in Sheffield, many of whom are on zero hours contracts or other forms of low paid insecure work. Many are young women, the majority are from black, Asian and ethnic minority communities, and most had never heard of trade unions or ever thought of joining one. Instead of simply handing out union forms one day and not coming back, this involves a long period of face-to-face contact, building workers’ confidence and expectations and helping them to think and act collectively. Of course COVID restrictions hampered her work, but Rohan used her ingenuity and resourcefulness to get round this with on-line chat groups, zoom calls and other social media. We have been really impressed by what she has achieved.

Rohan has emphasised to us that her departure in no way implies any lack of faith in our project. On the contrary, she has told us how proud she was to be our Sheffield Union Organiser and her strong conviction that what we are doing is vitally important for young workers and indeed for the whole trade union movement. She has built a team of fantastic young activists, trained in organising methods and enthusiastic to continue her work, and has inspired many young workers to believe in trade unionism and take that message with them to other workplaces.

Sheffield Needs a Pay Rise is a partnership agreement between Sheffield Trade Union Council and the Bakers Food and Allied Workers Union (BFAWU). We have jointly raised funds to pay Rohan’s salary and the costs of the campaign. We are immensely grateful to the many union branches, other organisations and individuals who have donated sums of money both big and small to make this project possible.

Rohan’s will be a hard act to follow and we are immensely grateful to her for what she achieved. We are determined to keep this vital project going and shall be advertising for Rohan’s replacement very shortly. We will be carrying on not just as a solo project in Sheffield but part of what seems to be a growing movement. Leeds TUC has just appointed their own Union Organiser-again in partnership with BFAWU- and there are very interesting developments in other towns which we hope to announce soon. Harnessing the energy of young exploited workers to create a new vibrant cadre of militant union activists is our goal, and Rohan’s pioneering work has set us firmly on this path.

Thank you, Rohan. We wish you all the best for the future.